How to avoid colouration of a weld?

The colouration of welds is particularly important for stainless steels. In fact, this family of steel has a protective film that protects the metal from corrosion. But this film can be altered under certain conditions, especially during welding.

Where does the colouration come from?

Stainless steels “passivize” themselves naturally if the environment can provide enough oxygen to repair the film which is made of chromium oxide. The passivation helps to protect the steel from corrosion.

When this protective film of chromium oxide is altered by a scratch, it will repair itself if the environmental conditions are good; this means that there was enough oxygen in the welding zone in order to recreate the film. But welding stainless steel tubes can deteriorate this capacity if conditions are not respected.

During the welding process, the temperature rises and the metal reacts strongly with the oxygen that is in the air. This is the reason you use shielding gases for TIG welding which removes oxygen in the air. After welding, close to the weld seam, the metal can be covered by coloured oxides. These oxides have adverse effects, as they are source of corrosion.

Which information can the colouration of a weld indicate?

Every colour corresponds to a specific temperature and a specific composition of the oxides. Locally there can be a diminution of percentage of chrome, which is difficult to handle for the formation of the protection film and by consequence lowers the resistance of the stainless steel from corrosion.

A straw yellow colour indicates a small lack of protection that is acceptable for some applications, but the colour can also change to blue or black. The acceptation of the colour has to be defined in the specifications of the customer and/or be accepted by the customer.

Why is it so important to avoid the colouration of a weld?

This is the reason why you should never neglect the importance of the backing gas. If this operation is not handled correctly colouration can arise.

Corrosion is even more dangerous when gas or fluids are transported in tubes where no corrosion is admitted. This is the case in various industrial fields where a high purity level is standard, such as the production of semi-conductors, food and aeronautic industry.

How you can avoid the colouration of a weld?

1. Prefabrication is an important issue

To properly control a weld, certain pre-welding operations should be followed. Example: if in your workshop you weld both carbon steel and stainless steel, you will have to separate the two production lines in order to avoid any iron pollution.

At no time during processing should the stainless steel be in contact with carbon steel.

2. A good preparation of the surface to be welded

The surface of stainless steel will have to be stripped in order to eliminate any oxides or other impurities on the surface; then it needs to be cleaned with a dry product. After performing these processes only touch the workpiece(s) with gloves to prevent trace oils on the surface.

According to the needs of the customer in regard to the colouration of the weld, the welder has two possibilities concerning the procedure to weld the stainless steel.

Either they will have to avoid any trace of colouration or if the customer accepts a colouration during the weld. This means the workpieces will have to be “passivated”, treated, in order to have a perfect protection after the weld.

3. If you wish to avoid any colouration of the weld:

To begin with, you will use an adapted backing gas, generally argon with a purity index above 99.99% in order to remove all oxygen near to the root of the weld pool. This gas has to be as dry as possible, in order to avoid a small quantity of moisture that might decompose into oxygen and thus create a colouration.

This first option is even more important if the basic material is very expensive or if the geometry and the surface conditions do not allow a repair weld.

You can also add an oxygen meter that will inform you about the quantity of oxygen in the shielding gas. In the case of a programmed level indicated on the oxygen meter you can weld whilst controlling the colouration.

4. Sometimes a coloration is tolerated:

On the other hand, for certain applications, coloration of a weld can be accepted if this weld default is corrected afterwards.

In this case you will have to strip the welding surface by mechanical or chemical means, and to re-passivate chemically afterwards by immersion or spraying of nitric acid, enabling the repair of the protection film.

But bear in mind that this is an additional operation that you will have to accomplish and sometimes the results are not better than the first option.

If you wish to obtain high purity welds on thin tubes for a serial production, the use of a closed weld head will allow you to obtain welds without coloration. This is due to the pre-gas and backing gas in the weld chamber that surrounds the tube.

Once again: the pre-fabrication of a weld is of the utmost importance. Don't hesitate to contact us to talk about your projet. 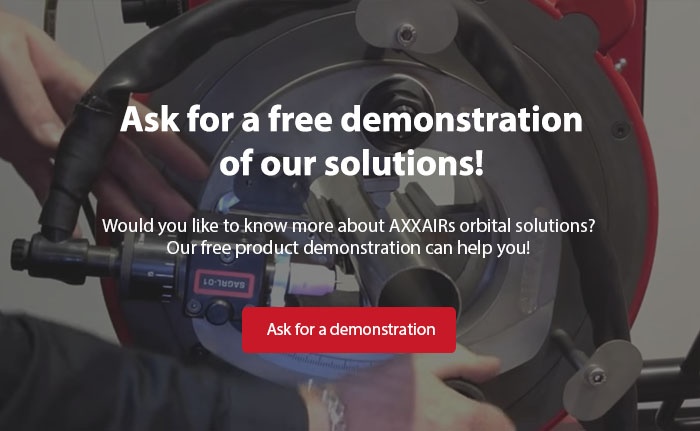