Influence of the choice of shielding gases in orbital TIG welding

The shielding gas is the second most important element – after the electrode – in the TIG welding process.

You can currently find a large choice of shielding gases on the market especially conceived for the TIG welding process.

Generally, the shielding gases are classified into three categories depending on their chemical reactivity. This classification allows you to choose the right gas according to the properties of the metals you want to weld and the type of welding result that is required.

Inert gases are monatomic such as argon, helium and blends, regardless of the composition. There is no reaction with the molten metal. Theses gases are used for TIG welding, MIG aluminium and alloys, as well as for plasma welding.

This is hydrogen and of course all blends such as argon/hydrogen.

Hydrogen is consuming oxygen and all oxidising gases; therefore it is called a reducing gas. By using hydrogen, the weld seam looks better (as it reduces the oxides) and it has a direct influence to the penetration profile and the welding speed due to the thermal conductivity. It is not recommended to use hydrogen with ferritic steels.

The ionising potential of shielding gases is a very important issue for orbital TIG welding as it has a direct influence on the welding speed and the penetration.

The table below shows some values concerning the ionising potential of the most current atoms and molecules.

Here you can see that the ionisation of argon is at 15.76 eV. This means that argon is a perfect gas for striking the arc. The higher the ionising potential is, the easier the performance concerning the striking of the arc. Helium has an ionisation potential of 24,6 eV and produces a high arc voltage. A higher arc voltage will allow higher welding speeds and has an influence on the form of penetration. 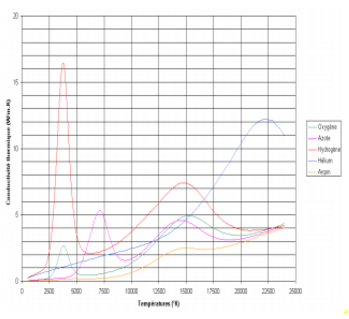 Another key factor is the thermal conductivity; this means the capacity for transmitting the heat. Every shielding gas used for orbital welding has a thermal conductivity, which evolves, according to its temperature. The higher the conductivity of the gas, the hotter the welding arc will be.

STABILITY OF THE ARC

The shielding gas has a big influence on the chemical characteristics of the deposition. These are the active gases such as: O2, CO2, N2, H2.

Effects of hydrogen and nitrogen

Hydrogen is a reductive gas; it helps to lower the percentage of oxygen in the deposit as well as the surface of the workpiece.

Also for metallurgical reasons, hydrogen must not be used for:

Nitrogen is mostly used in addition to other gases in order to protect stainless steels, duplex and super duplex (ferritic-austenitic structure). It helps simultaneously to enable in a way the creation of austenite and enhances the pitting corrosion resistance.

FORM OF THE ARC

The thermal conductivity describes the heat transfer from the centre to the outer part of the arc column and consequently the central axis of the arc, where the temperature is at his highest level.

Argon has a low thermal conductivity rate and creates a density of energy in the centre of the arc. As shown in the figure below, an electric arc is represented with two elements:

- The central axis which has the highest temperature and which determines the form of the penetration.

Ar/He : Melted area flared and larger at the root compared to argon.

The protection with the backing gas is most essential for all steels that are slightly or highly alloyed, as well as for exotic steels and all stainless steels.

Backing gas can not be needed for certain carbon steels, but highly recommended for all orbital TIG welding applications as it creates a protection of the inner welding seam and enhances the control of the welding puddle.

The choice of the backing gas has a direct influence of the characteristics of the material and the colouration of the welds.

Even for orbital TIG welding, the right shielding gas can often increase the productivity at a high degree. Hopefully this handbook will help you to choose the most suitable gas according to the final result desired and the welding process you use. The AXXAIR machines will help you to pre-set and to register a certain number of parameters. Ask for a demonstration to learn more about AXXAIR machines.